A Beginner’s Guide: 3 Rules of Badminton

Engaging in any form of sports is healthy. When we engage in physical activity, our bodies produce feel-good hormones called endorphins. Endorphins are also called natural painkillers and help people feel calm and relaxed. This is how sports work like a stress buster. Talking to other players while playing sports takes our minds off different worries, thereby helping us to shift focus.

Badminton is a fun sport that’s played worldwide. It can be played as singles and doubles. The game involves hitting a shuttlecock over a net and onto the opponent’s side. It is mostly played as a recreational sport. It’s easy to play and there aren’t many rules to follow.

You need to learn a few strokes and serves to get started. It’s popular among the public due to the number of health benefits attached to it. For instance, it boosts muscle growth, helps with stress, and improves mood and sleep.

If you’re wondering to play badminton but don’t know about its rules, then read this blog.

A badminton match consists of three games. Each game consists of 21 points. The side that scores 21 points first, wins the match. The player receives a point on every serve and the point is awarded to the side that wins the rally. In badminton, a rally starts as soon as the player performs the serve. The rally ends when the shuttlecock touches the ground in the opponent’s court. Whoever wins the rally, scores one point and gets to play the next serve.

The players must stand diagonally at the start of the match. The racket should be positioned downwards while playing the serve. In addition, players are not allowed to touch the net with their bodies or even racket. 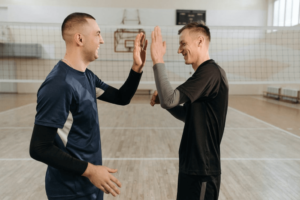 If you’re looking for a portable net system to set up in your backyard, then consider us at Cobra Net System. We manufacture volleyball net systems for outdoor and indoor volleyball games. Our volleyball nets are easy to install and durable.